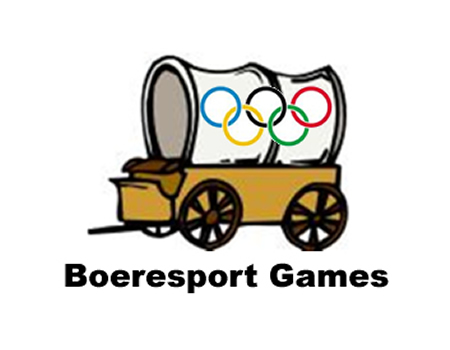 The Boeresport Games team building event starts off with team building ice breakers which are also used to divide the group into teams. These ice breakers are designed to divide the group up in a way that ‘cliques’ are separated and new relationships formed. These teams then go on to compete against each other in various team building exercises that are based on traditional games. Points are awarded for each exercise and the team with the highest points at the end of the event is declared the winning team of the Boeresport Games.

These are some of the team building exercises that may be included in the Boeresport Games team building activity. Your facilitator will select the appropriate exercises to match the venue and team on the day.

Kruiwa Stoot - Also known as wheelbarrow races, kruiwa stoot is a fun and energetic team building exercise. Two team members compete in a race, where one is crawls on their hands, while the other participant lifts their ankles. Once the specified distance has been completed...

Three Legged Race - An old classic and favourite activity, three-legged race is all about cooperation between team members as much as it is one of speed. Two participants attempt to complete a short race with the right leg of one team member strapped to the left leg of another...

Arm Wrestling - Arm Wrestling involves two participants. One places one arm on a surface with their elbows bent and touching the surface, and they grip each other's hand. The goal is to pin the other's arm onto the surface, with the winner's arm over the loser's arm...

Sack Race - The sack race is a fun and competitive game where participants put both of their legs inside a sack that reaches to their waist. They then need to jump forward inside the sack from a starting point to the finishing line. The first team to cross the finish line is the winner of the race...

Donkie Se Stert Aan Steek - The classic game of Pin the Tail on the Donkey game. Team members are blindfolded and rotated a few times. They then need to walk to the board with the donkey, and pin the tail on it. The team who pinned the tail closest, is the winner...

Tug of War - Tug of War is a long standing favourite team building exercise. A real sense of teamwork is created as young and old, big or small, work together as a team to come up as the victor in this battle of strength. The formal rules for Tug of War state there must be two teams of eight people each...

Bokdrol Spoeg - Bokdrol Spoeg is a competition who can spit hard pellets of dung ( droppings ) of goats the furthest. As disgusting as this sounds it is hugely popular and is a fun and extremely competitive activity...

Catty Shooting - Catty Shooting is also known as slingshot shooting. The Catty is a small hand-held weapon that is powered by pulling back an elastic strips that is joined to the small pocket that holds the items being shot. In TBAE's activities a target needs to be hit...

"Thank you so much for today! Your team was outstanding and the kids had a blast! We appreciate all your time and effort! - Monica, Alpha Studies

"I just wanted to thank you and the team for great teambuilding session Ian ran for us. We all had so much fun, taking some of us back to our roots and making some of us step out of the normal." Loren Randall-Düvel, TFG Internal Audit

"I’d just like to thank you and your team for a wonderful day. Duncan, James and Eugene were absolutely fantastic and my team had a wonderful day. The venue was also nice and we were well taken care of. I will most definitely recommend you guys to anyone that needs such a day." Phyllis Ledwaba, Executive PA to Finance Director, Comair

"I just wanted to say thank you so so much for a fantastic Survivor team building event last Friday!!!! Everyone had a great time, we enjoyed every minute of the day. The whole day was filled with fun and laughter, never a dull moment. The facilitators were able to keep us engaged and involved throughout. Eugene is absolutely the best, you can really tell he loves what he does. Big thanks to him. The day was a huge success, will definitely tell everyone I meet about your company and will recommend TBAE to our other departments to consider for future events." Mmakopa Mosalo| Senior Financial Assistant | CIB Insurance Administrators

Simonsberg Cafe Team Building Venue in Stellenbosch, Cape Town
The Simonsberg Café boasts beautiful views of the DelVera garden with Table Mountain in the background, delicious food and a cozy fireplace for winter and a fairytale garden to enjoy in summer. In the heart of the Winelands, Delvera is an exquisite venue with a tranquil atmosphere that lends itself to the ideal venue for your team building. Delvera has a farm atmosphere, beautiful gardens and breathtaking views of Table and Simonsberg Mountains, vineyards, and fynbos, making it ideal for every sort of celebration.....

Poplars Restaurant Team Building Venue in Durbanville, Cape Town
Poplars Restaurant is housed in one of the oldest heritage Cape Dutch Farmhouses in the Durbanville Wine Valley and nestled between mature gardens on the beautiful D’Aria Wine Farm. The large shaded garden provides a tranquil spot for team building events. The Italian inspired menu caters to a variety of tastes that is complimented by award winning wines from the winery and surrounding area. Only 30 minutes from both Cape Town International airport and the city centre, Poplars is the ideal escape for conferences, private events, corporate events, team building and weddings. The restaurant is open daily for breakfast, lunch and dinner.....

Misty Hills Country Hotel Team Building Venue in Muldersdrift
If it's service excellence with an authentic African twist that you are after, then Misty Hills Country Hotel, Conference Centre & Spa welcomes you. Nestled in the foothills of the Swartkop mountains on the threshold of the beautiful Kromdraai Valley in Muldersdrift, Misty Hills is one of the most popular hotel and conference venues in Gauteng.This charming stone-built hotel, embodies the ethos of Africa. Set in more than 60 acres of lush botanical gardens, Misty Hills is the ideal venue for functions, conferences, exhibitions, product launches, team building, getaways and events.