In which town do you require a team building venue?:

These are just a few of the towns in North West Province where we found suitable venues that we most often use for team building. Should the venues in these towns not be convenient or suitable for your event, we can either find you an alternative venue or you can arrange your own venue and we will come there. 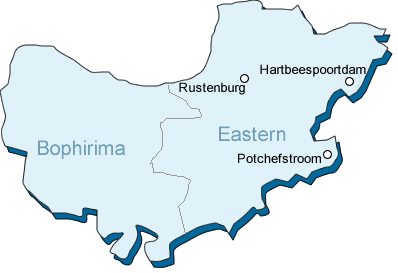 About the North West Province
The North West province of South Africa was created after the end of Apartheid in 1994. The province is bordered on the north by Botswana and to the south by the provinces of the Northern Cape and Free State, and on the northeast and east by the Limpopo Province and Gauteng. The North West Province consists mostly of flat areas of scattered trees and grassland with the Magaliesberg mountain range extending about 130 km in the northeast region of the province. Almost all of the province's rainfall occurs during the summer months. A large percentage of the people in the North West Province live in the rural areas, and the majority of the residents are the Tswana people who speak Setswana. Smaller groups include Afrikaans, Sotho, and Xhosa speaking people with English commonly spoken as a second language.