TBAE HAS OFFICES IN SOUTH AFRICA AND THE UNITED STATES

TBAE’s Laughter Games team building activity is designed to do just what it’s name suggest, to cause laughter, a lot of laughter. In this activity teams compete against each other in a combination of team building exercises, especially chosen because of the fun and laughter they create.

The Laughter Games team building activity starts with a team building ice breaker that is also used to divide the group into teams. The ice breaker is designed to divide the group up in a way that ‘cliques’ are separated and new relationships formed. These teams then go on to compete against each other in various team building exercises. Points are awarded for each exercise and the team with the highest points at the end of the event is declared the winning team of the Laughter Games.

Laughter has many team building benefits. Laughter is a powerful way to combat stress and conflict. Humor lightens burdens, connects team members to each other and inspires hope. It is an excellent resource for surmounting problems and enhancing relationships within a team. Laughter relaxes the body, boosts the immune system, releases feel good chemicals and even keeps your heart healthier.

Laughter and playful communication, strengthen relationships by fostering emotional connections and positive feelings between team members.  Being able to laugh, play and have fun together makes being part of a team more enjoyable and helps the team to solve problems, connect with each other and be more creative. Playing with a problem can often lead to a creative learning opportunity. Humor will give your team a new perspective that is more relaxed, creative, positive, balanced and joyful. 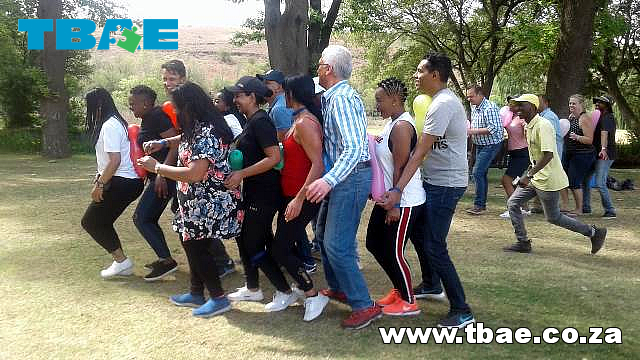 These are some of the team building exercises that may be included in the Laughter Games team building activity. Your facilitator will select the appropriate exercises to match the venue and team on the day.

Bhati - The object of Bhati is to pick up as many objects as possible...

Blindfold Maze - Blindfolded participants are given a route by their partners...

Dizzy Mummy - The contestant must unroll a toilet paper roll by executing...

Human Knot - Starting in a circle, participants connect hands with two others...

Olympic Fashion Show - Teams need to tap into their creative side in this exercise...

Pendulum Walk - In this hilarious activity the participants need to use...

Sack Race - The sack race is a fun and competitive game where...

Spider's Web - The Group must pass a piece of rope through every hole in the tower...

Water Transfer (using helmets) – Water is transferred from person to person via a bucket attached to a helmet. The first team to fill-up the container at the finish point wins...

"On behalf of everyone present yesterday, we would just like to extend a massive thanks for a fantastic teambuild. The events was awesome and really delivered per the description and expectations, in fact it exceeded it. Ian and Bongani were amazing!" Bonita Peterson, Momentum

"Thank you for you guys, we really had fun. It was awesome the food, the entertainment, wow" Michelle de Vos, FNB

"I would just like to thank James, Onkgopotse and Masego for Friday. They were wonderful facilitators and we really hope to meet with them again in future!"
Liza Ruthenberg | HR & Payroll Administrator | MMD Mineral Sizing (Africa) (Pty) Ltd

"Thank you to the team for facilitating the event yesterday. The staff had loads of fun." Astrid, BP

"Thank you so much for everything and many thanks to Ian aswell, we had fun everybody enjoyed the games , I will definitely recommend your company to my other colleagues. Looking forward to doing business with you in the near future."  Pam, MMI Holdings Limited