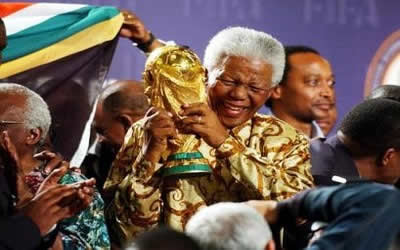 Africa was chosen as the host for the 2010 World Cup as part of a new policy to rotate the event between football confederations. The five African nations who placed bids to host the 2010 World Cup was South Africa, Morocco, Egypt, Libya and Tunisia. Following the decision of the FIFA Executive Committee not to allow co-hosted tournaments, Tunisia withdrew from the bidding process. The committee also decided not to consider Libya's solo bid as it no longer met all the stipulations laid down in the official List of Requirements. After one round of voting, the winning bid was announced by FIFA president Sepp Blatter at a media conference on 15 May 2004 in Zurich. South Africa was awarded the rights to host the tournament, defeating Morocco and Egypt.